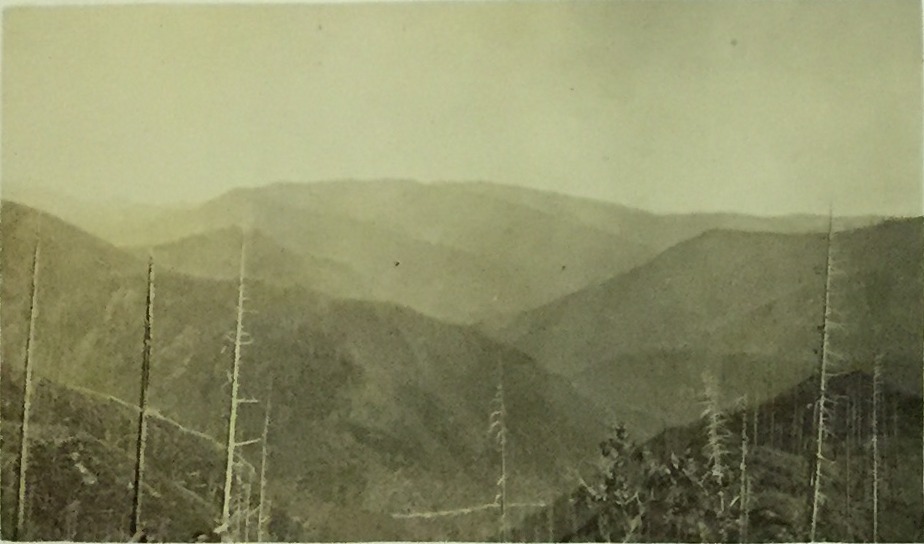 Smitty knew how to tell a tall tale. I find it interesting that when this story was written, it was set well into the future, rather than in the present or past.  I thought it might be a typo, but he mentions the “great city of Moscow,” which it certainly wasn’t in 1926. I’ve added some spelling corrections and punctuation. — Eilene

When I was a Senior in high school at Moscow, Idaho, in 1926, I wrote for the high school paper. I recently received a call from Gordon Hauck who lives here in Portland. He was rummaging through some old papers his mother had left behind, when he came across the high school paper dated November 12, 1926. The Heading:

In this issue appeared the following: 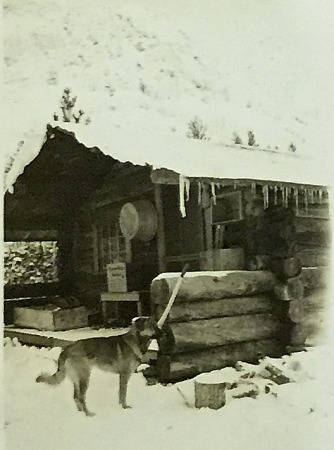 THE FASTEST DOG ON BALD MOUNTAIN   By Laurence Smith

It was a cold blustery night in the fall of 1959, the rain and wind were beating fiercely upon the roofs of the cabins in the little settlement of Bear Lodge. Bear Lodge was a little group of weather-beaten houses and cabins on one of the highest peaks of Moscow Mountain. It was here that the old timers had come for refuge from the wild din of noise and confusion of the great city of Moscow.

On this particular night all the old timers had gathered at Justin Smith’s shanty and were sitting around the fire drinking cider and cracking jokes, for Red Driskill hadn’t started yet. As everybody knew, when Red started there was no room for anybody else, for Red was the best liar in the settlement; however, to get Red started on a good story it was first necessary to get him full of cider, so the crowd kept filling his cup and suggesting possible topics. It was not until Cliff Benson started talking about dogs that Red seemed interested.

“You know,” said Cliff, “once when I was down on the prairie, I had a dog named Ike who used to herd the cows in at night for me. He was so small though that one night when he was bringing home the cows he fell in a gopher hole and I never did get him out.”

“Well,” began Red, “I ain’t never had no freak dogs but the one I had over on Bald Mountain beat anything I ever had before. Do you remember old Jeff, Fountain? The fastest dog on Bald Mountain.”

“Yea, I believe I do,” replied Fountain, “but what ever became of that dog anyway?”

“Well, it were this a way. That dog was the fastest thing on four legs. He could outrun anything. Why once when I was over on the ridge there was a pack of wolves that kept killing the neighbors hogs and chickens. They never bothered me, though, because I left Jeff loose at night. But one night I forgot to let him loose and those blamed hounds killed three of my best sheep. That kinder made me mad, so next morning I takes old Jeff and strikes out to find them.

“We found them about noon in a den under a pile of rocks. I just unchained Jeff and started him after them. Away he went out across the hills so fast that he was out of sight before I knew it. I knew they would be back around that way pretty quick so I climbed up a hill to wait. I hadn’t no more than got there when here they come. Those wolves running as fast as the wind and Jeff right after them, but I could see that the wolves were panting purty hard for it was a ten mile circuit that they were making.

“Next time they came around the wolves were getting their second breath and Jeff, hot on their heels, didn’t seem to even breathe hard. I watched them until dark and I saw that Jeff was gaining, so I went home assured that he would have them caught by morning.

“When morning came I didn’t see anything of him, so I concluded that he had gone over the mountain to bury them, as he often did with meat bones. However, when he hadn’t shown up after four days, and I had my plowing done, I set out to find him. I went out to that hill and be dogged if here he didn’t come chasing them hounds and still going strong. Then I looked again and I seen there warn’t but one wolf running. That was funny, thought I, and the wolf not even getting tired, so I kept watching and purty soon I seen the dirty, low-down trick them there measley critters was a playing on my dog!

“You see, they was a relaying on him and every time one got near that den another wolf took his place. There poor old Jeff had run five days and all the time after a different wolf. Do you know that made me so mad, to think of my dog getting cheated, that I ups and goes home, gets a stick of dynamite, and comes back to that den, and blows them devils to a billion pieces.”

With this, Red paused for another cup of cider.

“But what ever became of that old dog?” inquired Justin.

“That’s just what I’m going to tell,” said Red. “Though it breaks my heart every time I tell it.” A tear dropped from his eyes. “Tom you used to live over on Bald Mountain. Maybe you remember that jack rabbit that was over there for so long a time?”

“I shore do,” acknowledged Tom. “He ate a stack of hay of mine one time.”

“He sure was the terror of the neighborhood,” said Red. “He had a lot of the old settlers moving. He would destroy a twenty acre field of wheat in one night. Well, one year I was raising a prize pumpkin. I had tried for four years to get a ton pumpkin, but this year I knew I would do it, for my vegetable was a sure monster.

“Then one night, Jeff and I carelessly went hunting, and blamed if that jack rabbit didn’t come over and eat that whole blessed pumpkin. Well that made me sore so I vowed that I’d get that rabbit if it took a year. Now one of the neighbors got word that I was going to run that rabbit, so he comes over and bets me a hundred dollars Jeff couldn’t do it. Well that made me more determined than ever, so I started to put Jeff in training, because I knew he was purty soft.

“I took him out every morning and let him run the fifty miles around Clams Gulch. He was fed nothing but raw beef. In a month he was a changed dog – lean and gaunt – without an ounce of fat on him. His great, long legs were hard with muscles and he was sure raring to go. I set the day at Thanksgiving and for the remainder of the time I fed him a cup of T.N.T. every meal – I never told the neighbors of this though.

“I got up early on Thanksgiving morning and I never saw a purtier day. The sun shone through the frosty air and warmed things up jist right. In fact, I’d never seen a better day; but if I’d knowed the awful tragedy I was going to bring about that day I’d a just stopped right there. Well, anyway I started for the base of the mountain. I sure had some time getting there. I had to hold Jeff with a log chain and I had two men a helpin’ me. Why, that dog would just rare on the chains and froth at the mouth craving to get loose.

“We finally got there and everybody in the country was there – even the preacher. I waited until about 9 o’clock when the jack was most likely to be jumped. Then I let Jeff loose. It was five miles around the mountain and Jeff went around it with a whiz. He jumped that jack rabbit about 9:10. I was holdin’ the watch. The chase began.

“At 9:13 he was back around and past the crowd with a zip, with the jack about a hundred yards ahead and holding his own. At 9:15 he was back around again, and at 9:18 they passed again but too fast to catch a good glimpse of them. From here on the race was sound rather than sight for they were going too fast to see. The jack would sound “zip” and he was passed, and then another “zip” told us that Jeff was hot after him.

“The crowd was getting hysterical. They’d rub their eyes and yell. So excited they couldn’t stand still. One old guy had a cigar in his mouth and he got so excited that he actually chewed and swallowed the whole thing, and I seen that feller who bet me that hundred dollars was a gittin purty pale.

“Purty soon the “zip, zip, zip” them two had began to get closer together, so we knowed that Jeff was a gaining. He would give a bark every time he came around past the crowd, but we didn’t hear it till he was plum on the other side of the mountain. Purty soon we begun to smell something like burning hair, and the fumes rolled down from the path the two was a making, so we knowed they must be getting warm. The zips kept gitting so close that it was one big zoom-zoom now, as they went past.

“Then the awful thing happened. We heard the piercing death cry of the jack rabbit and it slid with a cloud of smoke at our feet, but old Jeff couldn’t stop. He had to circle that mountain ten times before he could stop, and then; alas, it was too late. Old Jeff was through.

“He laid at our feets, his tail aflame and smoke just a pouring out of his mouth. I rushed to him, but to no avail. He burst out in flames before I reached him. He was actually burned up from the intense friction.

“That rabbit was done to a turn. We just sat down right there and had a real Thanksgiving barbeque, but I felt so bad I jist cried the whole meal.” 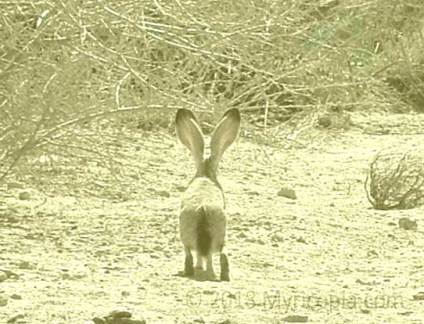 Note: the top two photographs are from Smitty’s photo albums. They were probably taken in Montana in the early 1930s.

4 thoughts on “The Fastest Dog on Bald Mountain” 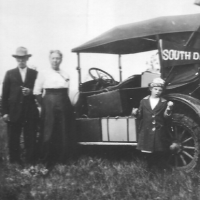 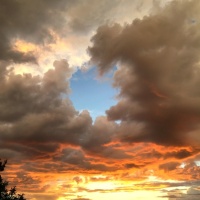 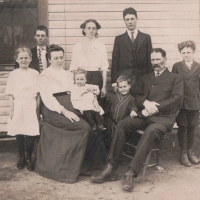 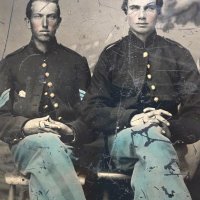 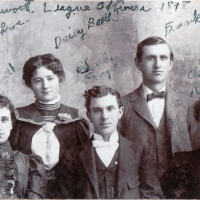 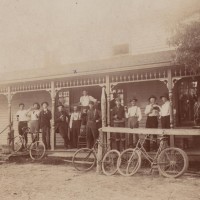