I once asked a classroom of college biology majors, some of them pre-med, whether they “believe in evolution.” About half raised their hand.

Science is not about believing. Belief and faith are the realm of religion and spirituality. In fact, you could say that science is the antithesis of belief, because it’s rooted in skepticism. (Though I don’t think I’d want the students who didn’t raise a hand to be my doctor – just sayin’)

This is why science and religion aren’t mutually exclusive. Some scientists are religious. Faith is a very natural human desire.

Science is a methodology. It is analysis of empirical evidence, collecting data, making observations, experimentation. Results need to be replicable and peer-reviewed.

It’s important to understand that science does not prove anything. The scientific method produces hypotheses based on evidence and observation to explain how the world and universe function. Then scientists set about trying to disprove the hypotheses.

Sometimes non-scientists confuse the terms hypothesis and theory, such as when they say that “evolution is just a ‘theory’.”

In science, a theory is the currently accepted understanding of a natural phenomenon that has withstood many, many years of attempts to disprove a hypothesis. If new evidence arises to suggest a revision to the theory, it must undergo the same rigorous testing to become accepted. This has not happened to the theory of evolution since Darwin and Wallace introduced it in 1859.

In other words, theories withstand the tests of time and skepticism.

Science has not proven what gravity is, for example. But it is observable and measurable. Through mathematical formulas, gravity can be understood and be used in a variety of ways.

Once science has a workable theory in place, amazing things can happen. This is why science gives you space travel. Religion does not.

Science gives you artificial hearts and chemotherapy. Religion does not.

Science gives you plastic, electricity, television, and the internet. Religion does not.

Science gives you nuclear bombs. Religion does not. (Thank you, Religion!)

Science deals with the physical realm. Religion, the soul.

Like gravity or solar energy, evolution is an observable phenomenon. It’s the reason new flu vaccines are produced every year. Humans have harnessed evolution through artificial selection (rather than natural selection) to create food, such as corn (I don’t mean the GM variety) and broccoli, for example. Evolution is occurring every moment of every day.

When someone tells you they “don’t believe in” evolution, it’s like they’re closing their eyes tight, sticking their fingers in their ears, and shouting, “La La La La La La La.” They’ll just pretend it doesn’t exist. But it exists regardless.

Darwin and Wallace knew nothing of genes and DNA, which makes the robustness of their theory all that much more impressive.

So, what is the theory of evolution? I’ll explain in my next science post, where I answer the question posed by my friend’s college-age son:

“If humans descended from monkeys, why are there still monkeys?”

Why, thank you for asking!! Stay tuned… 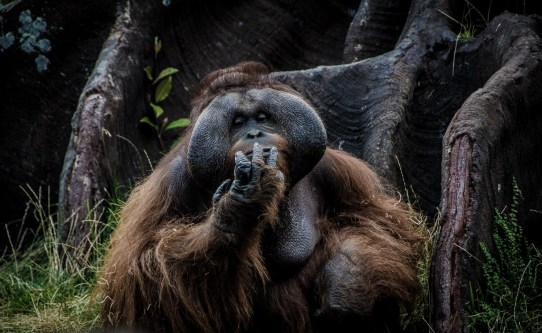 7 thoughts on “Science and Belief”