Winter entertainment in 1930s South Dakota was somewhat limited. There were movies and dances. And basketball. My grandparents, Reatha Gusso (15) and Everett Halse (30), were dating in January and February 1932 and watching basketball games was one of the acceptable activities.

Reatha mentions the games in her diary for the year:

Went to basketball game tonite. South Shore won. Score 25 to 24. After game went with Everett to program at Bert Drake School. Program was over when we got there but we kids stayed and played games . . . Had lots of fun. Got a date for Wednesday. I wonder where I’ll go. Bed 2:15.

Everett and I went to the basketball game at Bradley tonite. Bradley won 22 to 12. Went up town to look for Al. He said he was going to stay in town. So Everett and I came here. We came in the house & listened to the radio. Dad played some on the violin and I showed Everett some pictures we had here. He left here about one. Had a good time and am glad he came down . . . Bed 1:00.

Today hasn’t been so bad . . . Soph. class got one scolding today. What a wonder. Went to the basketball game between Florence and Lily. The same old story. Lily won score 22 to 23. Gee I was mad. I seen Everett in the bargain so that wasn’t so bad . . . Bed 10:00

Florence was Reatha’s high school, which she attended with Everett’s younger brother, Alvin Halse. Al played on the Florence team, along with one of Reatha’s Bodtker cousins. Though Florence’s record was generally dismal, in February the team managed to win the Little Eight tournament. Reatha never mentioned the good news. 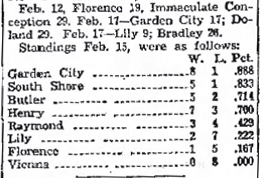 Florence near the bottom of the rankings. (“Loss is Costly to Garden City” Evening Huronite, February 19, 1932, p. 7 from Newspapers.com) 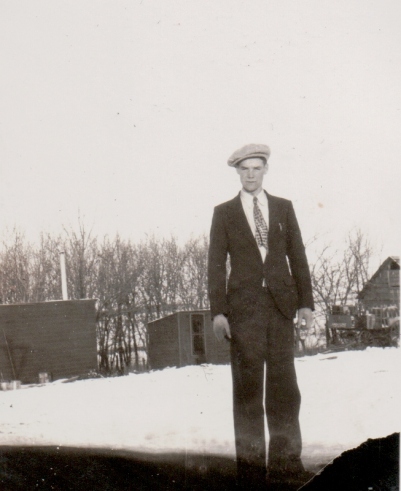 Al Halse in December 1931, a couple months before the Little Eight Tournament.

By 1945, Reatha and Everett were the parents of four boys, and sports became a family interest. Nathan, the youngest, was particularly athletic. He played football, tennis, and wrestled. From the football team roster, I learned that in his junior year (1961) he was 5’ 9” and 155 pounds. I think that must have included gear, because he wrestled in the 141-pound class. 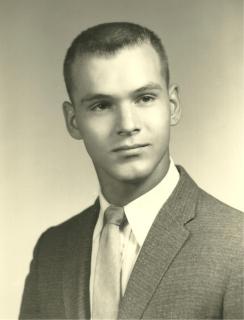 In the summer, Nathan apparently participated in some type of boat races on the Willamette River. I think these were speed boats; I recall watching such races in the late 1960s when we lived in Corvallis.

Nathan managed to get a fair amount of press coverage on the sports pages. It wasn’t always good news. 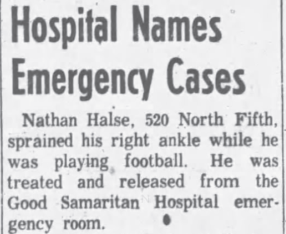 I never participated in high school sports, unless you count marching band (we actually lettered for that). As an adult, I played recreational softball for a number of years. My dad also played rec league softball. Mom never took any interest in sports that I recall, though she and Dad did play golf and tennis.

My older brother did not play sports in school, but loved watching Nascar and playing golf. My younger brother was on the high school golf team. Golf’s a sport, right? Well, let’s just say it is. So, this particular Halse clan isn’t exactly a knockout in the sports arena.

Feature image: My dad (marked with a red X) with his youth baseball team. The W stands for Washington Elementary School. Corvallis, Oregon about 1944. I remember playing recess games in that building in the background 25 years later.