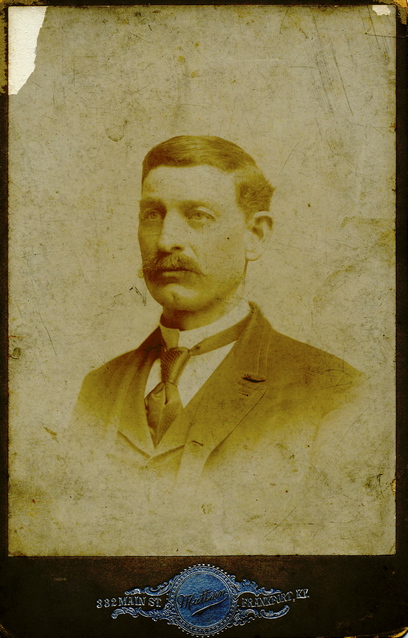 ho-ri-zon, n. 1. the line marking the apparent junction of earth and sky 2. range of outlook or experience. (The Merriam-Webster Dictionary)

The Putterer’s 3rd great-grandfather bore the delightful name of Horizon Jewett Poor. His middle name was the surname of his paternal grandmother, but the origin of his first name is unknown. Even though he passed the name on to his son, neither of them were known as Horizon. The elder went by “Harrison” and the junior by “Horace.”

Horizon’s parents were David Jewett Poor and Rachel Welsh. Rachel was not David’s first wife, but the name of his earlier wife or wives is unknown at this time. Horizon had two older half-siblings and a younger sister.

David J. Poor was a native of Rowley, Essex County, Massachusetts, and his father, Amos Poor, served in the Revolution. In 1811, David and Rachel acquired 600 acres of land in north-central Ohio, then Delaware, but now Morrow County.1 This area had been surveyed for sale by a land act in 1796 called “An Act regulating the grants of land appropriated for Military services, and for the Society of the United Brethren, for propagating the Gospel among the Heathen.” So much for separation of church and state!

David purchased military warrants from three different men for a total of 300 acres. Rachel received a warrant for another 300 acres as the sole heir of her father, Samuel Welsh. Her acreage was adjacent to one of David’s parcels.2 Here, Horizon and his sister Abigail were born in 1812 and 1816 respectively.3

The Poor family relocated to Covington, Kentucky, sometime prior to 1820.4 In early 1824, just before he died, David wrote a will directing his two sons, Theodore J. and Horizon J. to select guardians and apprenticeships at age 16 (which was immediately for Theodore).5

Horizon chose to enter the carpentry trade. At age 21, released from his indenture, he married Sarah Ann Marshall in 1833.6 They had six children together, five daughters and finally, a son and namesake. (Sarah may have had another son in October 1850, but I haven’t confirmed this.) Horizon joined the local Masonic lodge, the Odd Fellows, and the volunteer fire department in Covington.

On June 10, 1850, earth met sky and Horizon Jewett Poor’s range of outlook came to an abrupt end. Probably working a carpentry job on a hot summer day, he took a drink of water from a contaminated source. Cholera killed the hearty 38-year-old man in mere hours.7

Horizon’s sudden passing stunned his family, the community, and his many friends. The organizations he belonged to all contributed to his funeral procession and passed flowery resolutions, published in the local paper, extolling his many virtues and expressing sincere regrets about his death.

Covington Fire Company No. 1, where Horizon served as Vice President, wrote the first of these:

The other two are in a similar vein. Clearly Horizon “Harrison” J. Poor was held in high esteem among the citizens of Covington, Kentucky.

32 thoughts on “For Whose Excellence We Bear Witness”